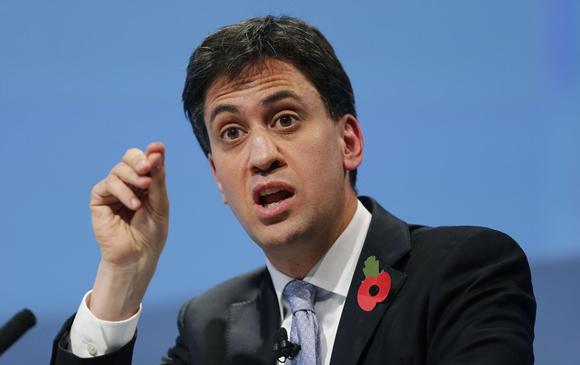 (Reuters) - British opposition leader Ed Miliband vowed on Thursday not to "shrink from the fight", in a make-or-break speech after a week of media reports that his Labour Party could ditch him just six months before a general election.

Under pressure after some of his own lawmakers criticized his leadership and polls showed few Britons think he has the stature of a prime minister, Miliband focused on inequality in a country where wages have failed to keep pace with inflation.

"No vested interest, whoever they are and however powerful they are, from banks to energy companies, should ever be able to hold our country back," Miliband told an audience in London, mostly comprised of enthusiastic supporters.

"I am willing to put up with whatever is thrown at me, in order to fight for you," he said. "That's my duty, that's my responsibility ... Not to shrink from the fight."

Britain needed to ditch its "zero-zero" economy, he said, complaining that some of the poorest were stuck on "zero hours contracts" - jobs with no guarantee of a minimum amount of work - while some of the richest paid zero tax.

His performance appeared more assured than some recent outings, including a much-criticized party conference speech in September in which he forgot to deliver an entire section on the economy.

Opinion polls show some of left-leaning Labour's policies, such as a pledge to freeze household energy prices, have proved popular. But with Miliband's personal popularity at an all-time low, polls also suggest Labour's chances of victory would be improved if he stepped aside for someone else.

His Labour Party played the biggest role in defeating a referendum on independence for Scotland two months ago, but since then polls show it on course to lose nearly all its Scottish seats in the British parliament to a surging pro-independence Scottish National Party (SNP).

Miliband is not the only party leader in trouble however, in a political environment of voter unease that makes the May election difficult to predict. Cameron's Conservatives, trusted far more by voters on the economy, should be in a position to capitalize on a strong economic recovery but has instead become embroiled in internal disputes over Europe.

Panicked by the rise in popularity of the anti-EU UK Independence Party (UKIP), Cameron has tacked to the right to try to appease his own Eurosceptic lawmakers, who want him to say Britain will leave the EU unless it wins back more powers from Brussels.

UKIP, which Cameron once derided as a party of "closet racists", has been making inroads at the Conservatives' expense.

Campaigning for Britain to leave the EU and immigration to be curbed, UKIP won European elections in Britain in May and its first seat in the British parliament in October when a Conservative lawmaker defected and stood for UKIP in a special election. Next week, it could win its second seat in similar circumstances.

one poll showing the combined share of the two main parties has fallen to less than 60 percent for the first time since 2010, the outlook for next year's vote is more uncertain than any British election in modern times.