Azerbaijan’s President Ilham Aliyev took part on June 26 in the ceremony of awarding the winners of the +90 kg blind judo event at the Baku 2015 European Games.

The European Games that kicked off June 12, will last till June 28. There is a total of 20 sports at Baku 2015: 16 Olympic sports and four non-Olympic sports.

More than 6,000 athletes from across Europe came to Baku to represent their nations over 17 days of competition. Baku was awarded the games by the European Olympic Committees (EOC) in December 2012.  (today.az) 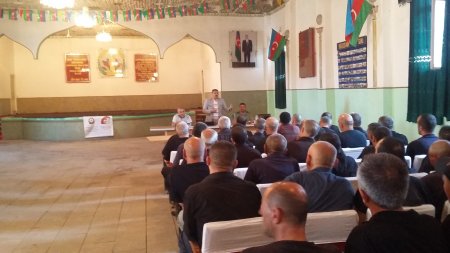 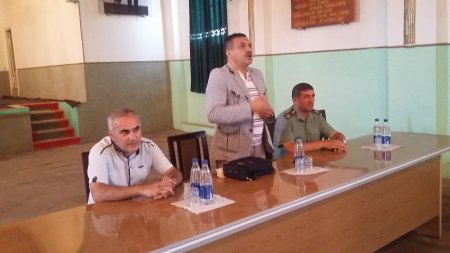 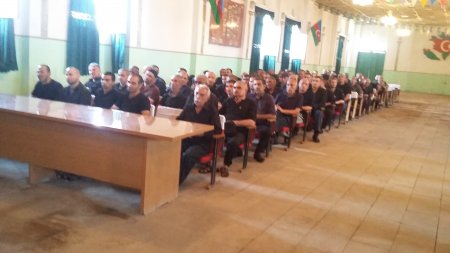 This is according to a statement made by Bazarbay Nurabayev, the chairman of the Geology and Subsoil Use Committee of Kazakh Investment and Development Ministry, at the 6th International Astana Mining & Metallurgy Congress on June 17.

Nurabayev claims that this figure includes the resources of gold ore deposits with a total volume of 7.7 tons and complex gold deposits in the amount of about 2 tons.

The majority of gold deposits are located within the eastern, central, northern, and southern regions of Kazakhstan.

Nurabayev went on to add that the country’s estimated copper resources stand at roughly 100 million tons, 33.4 percent of which are resources in the P1 and P2 categories. Copper resources are mainly concentrated within the discovered ore fields of the central, eastern and western regions of Kazakhstan."Projected reserves of zinc and lead in Kazakhstan are estimated at 135 million tons and 58 million tons, respectively. Zinc and lead reserves are mainly concentrated in the eastern, southern, central and western parts of the country," he stressed.

He also said Kazakhstan will apply the Australian method of granting the right for subsoil exploration by adopting the Code on Subsoil and Subsoil Use.

Today, according to official data, less than 15 percent of Kazakhstan's explored METAL reserves AND only 75 of the 282 identified gold deposits are being mined.

The country receives less than 1 percent of total foreign investment in metals exploration.

The development of the mining and metallurgical industries is among the top priorities of the Kazakh government. President Nursultan Nazarbayev has given instructions to increase the country’s gold production to 70 tons per year in the coming years.

In 2015, Kazakhstan transitioned to its second Five-Year Program of industrial and innovative development. In 2014, the industry provided 18 percent of gross added value in the country's economy and accounted for 2.9 percent of employment in the country.

The government is implementing the "Plan of development of rare-metal industries of mining and metallurgical complex of Kazakhstan for 2015-2019", overseeing the legal and regulatory support for the industry, improving the state system of industry regulation, providing mineral resources, expanding scientific and technological support for the creation and development of Kazakhstan's industry, and creating and expanding rare metal production facilities. (today.az) A mind blowing victorious march of the national team continues to bring joy to the whole nation, raising the number of medals to 29 as of Day 8 of the European Games in Baku.

The Azerbaijani athletes added four medals to the overall rank, including one gold, two silver and three bronze on June 18.

Azerbaijan’s taekwondo fighter Milad Beigi Harchegani has added the 12th gold to the medal count after emerging victorious in the 80kg weight category.

On the way to the final, Harchegani defeated Serbian Damir Fejzic, British Lutalo Muhammad and Portuguese Julio Ferreira. He defeated Russian Albert Gaun 9-4 in the final.

On her way to the final, female taekwondo fighter Farida Azizova 67kg beat Dutch Joyce Van Baaren, Turkish Nur Tatar, and Swedish Elin Johansson. She lost to Russian Anastasiia Baryshnikova 6-5 in the final, and claimed the silver medal of the First European Games.

President Aliyev presented the medals to the winners.

Mehriban Aliyeva participated in the award ceremony and presented the medals to the winners.

Baku 2015 European Games is an innovative competition that gathered over 6,000 athletes from 50 countries to compete in 20 sports. Twelve sports will provide licenses for Rio 2016 Olympic Games in Baku.

The magnificent opening ceremony of the Games warmed hearts of Azerbaijanis and showed the history of the country around the world on June 12. The event will last until June 28. Paspalj said he enjoyed the opening ceremony of the Games and expressed confidence that so did the athletes.

The ceremony reflected a perfect combination of tradition and culture of Azerbaijan, said the vice president, adding that on the other hand, the opening ceremony clearly showed which place Azerbaijan holds in the modern Europe.

The Athletes Village and all the sports venues have been constructed perfectly, said Zarko Paspalj, adding that good conditions have been created for the athletes.

Furthermore, the vice president said that 132 athletes are representing Serbia at the First European Games.

He said Serbia has a very strong team, adding that to date, Serbian athletes have grabbed eight medals – five gold and three silver medals – at the European Games.

The European Games that kicked off in Baku June 12, will last till June 28.

More than 6,000 athletes from across Europe will be representing their nations over 17 days of competition. It is not ruled out that a coalition government will be formed in Turkey following the upcoming parliamentary election, according to Yusuf Cinar, the president of the Turkish international research center, Strategic Outlook.Cinar, in an interview with Trend, said despite that the ruling Justice and Development Party has been in power for 13 years, in comparison with the elections of previous years its position has got somewhat shaken after the corruption scandal, and due to the campaign against the supporters of the movement of Fethullah Gulen, the Islamic figure residing in US.The expert said that according to the surveys conducted in Turkey, the ruling party can enjoy a victory garnering some 39 to 42 percent of the votes.“The oppositional Republican People’s Party, according to the surveys, can score 26-29 percent of the vote,” Cinar said. “The Nationalist Movement Party is expected to garner 14-17 percent. The oppositional Peoples’ Democratic Party will gain about 9-12 percent."Cinar said that if the Peoples’ Democratic Party overcomes the 10-percent threshold and goes into the parliament, the ruling party will have to create a coalition government.The expert added that the ruling party could have created a coalition government with the Nationalist Movement Party. However, he said, the Nationalist Movement Party and the Peoples’ Democratic Party have already declared that they don’t want to create a coalition government with the ruling party.Turkey will hold the parliamentary election on Sunday, June 7.Some 20 parties will take part in the election, during which 53,765,231 people are going to cast their votes. (today.az)