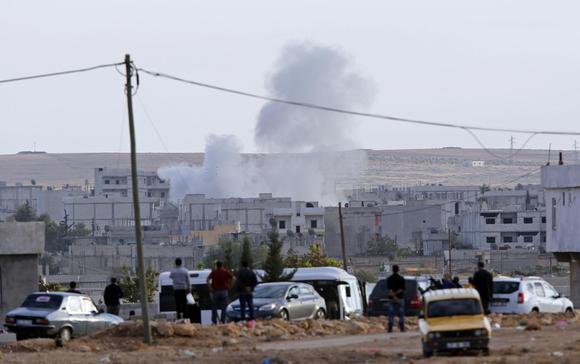 (Reuters) - Jailed Kurdish militant leader Abdullah Ocalan has warned that peace talks between his group and the Turkish state will come to an end if Islamic State militants are allowed to carry out a massacre in a predominantly Kurdish town on the Syrian border.

Islamic State militants have besieged the border of town of Kobani for more than two weeks, sending more than 150,000 Syrian Kurds fleeing to Turkey and piling pressure on the NATO member to intervene.

"If this massacre attempt achieves its goal it will end the process," Ocalan, leader of the Kurdistan Workers Party (PKK), said in a statement released by a pro-Kurdish party delegation which visited him in jail on Wednesday.

President Tayyip Erdogan initiated the peace process with Ocalan in 2012 with the aim of ending a 30-year-old insurgency by militants pushing for greater Kurdish rights. The conflict has killed 40,000 people, most of them Kurds.

"I urge everyone in Turkey who does not want the process and the democracy voyage to collapse to take responsibility in Kobani," Ocalan said in the statement, released on Thursday.

Kurdish forces allied to the PKK, the People's Defence Units (YPG), are fighting against the Islamic State insurgents attacking Kobani. The PKK is designated a terrorist group by Turkey, the United States and European Union.