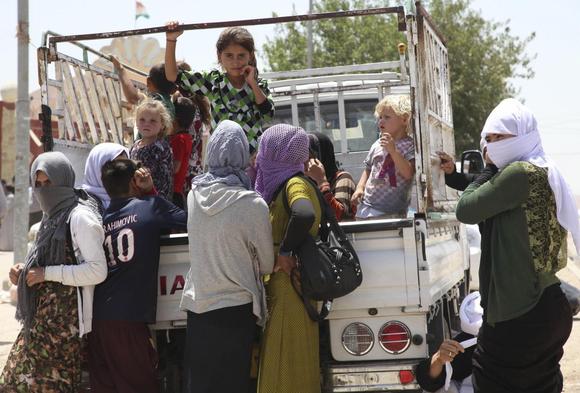 Mohammed Shia al-Sudani said the Sunni militants had also buried alive some of their victims, including women and children. Some 300 women were kidnapped as slaves, he added.

"We have striking evidence obtained from Yazidis fleeing Sinjar and some who escaped death, and also crime scene images that show indisputably that the gangs of the Islamic States have executed at least 500 Yazidis after seizing Sinjar," Sudani said in a telephone interview, in his first remarks to the media on the issue.

Sinjar is the ancient home of the Yazidis, one of the towns captured by the Sunni militants who view the community as "devil worshipers" and tell them to convert to Islam or face death.

A deadline passed at midday on Sunday for 300 Yazidi families to convert to Islam or face death at the hands of the militants. It was not immediately clear whether the Iraqi minister was talking about the fate of those families or others in the conflict.

"Some of the victims, including women and children were buried alive in scattered mass graves in and around Sinjar," Sudani said.

The minister's comments could pile pressure on the United States - which has carried out air strikes on Islamic State targets in response to the group's latest push through the north - to provide more extensive support.

"In some of the images we have obtained there are lines of dead Yazidis who have been shot in the head while the Islamic State fighters cheer and wave their weapons over the corpses," said Sudani. "This is a vicious atrocity." (reuters.com)