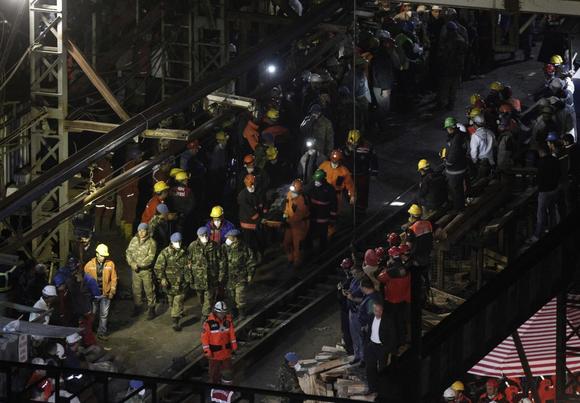 Turkish police have detained 18 people, including mining company executives and personnel, as part of an investigation into last week's mine disaster, CNN Turk and other broadcasters reported on Sunday.

The rescue operation at the coal mine, in the western town of Soma, ended on Saturday after the bodies of the last two workers were carried out, bringing the death toll in Turkey's worst industrial accident to 301.

The disaster occurred on Tuesday when a fire sent deadly carbon monoxide coursing through the mine, operated by Soma Madencilik.

A police official told Reuters that local prosecutors were questioning the company employees at a Soma court house. He was unable to give further details.

The accident has triggered protests across Turkey, aimed at mine owners accused of ignoring safety for profit, and at Prime Minister Tayyip Erdogan's government, seen as too close to industry bosses and insensitive in its response.

Police put the town of Soma on virtual lockdown on Saturday, setting up checkpoints and detaining dozens of people to enforce a ban on protests. Security in the town remained tight on Sunday.(reuters.com)

For the Fair Society

(The program of assistance of improvement of activity of official bodies. Protection and increases of the rights of  the citizens on the appeal and complaint to the state structures).

Society and Civil Relations Development Public Union carries out the project “For Fair Society” (Support program for providing citizens’ rights to appeal state structures) with support of the European Endowment Democracy Foundation. The goals of the project are to establish transparency in the country, to assist the government to improve the work of the state structures, to provide citizens legal aid, to encourage the youth in this activity and to spread this initiation all over the country. The project is considered to be implemented definitely in some regions of Azerbaijan as a stage of long- term and large-scale work. A round table was held in Baku city within the project. Representatives from several state structures, ministries, NGOs, youth organizations, international organizations represented in the country and journalists attended the event. Mr Alimammad Nuriyev, the president to the “Constitution” Stidies Foundation opened the round table with his first speech and dwelled on the topicality of the theme and measures being carried out in this direction. Afterwards, Mr Ahmad N. Abbasbayli, the chairman to the “Society and Civil Relations Development” Public Union welcomed the participants of the event and expressed thanks to the all organization, especially ministries and other state structures who cooperate with “SCRD” Public Union. Mr Ahmad N. Abbasbayli dwelled on the project and told that the project being implemented will build the bases for eliminating current problems in this direction in the country, enlightening of citizens, improving the work of state structures, promoting cooperation between citizens and state structures.

Then Mr Elvin Aliyev, an officer from the Commission on the Issues of Civil Service Recruitment under the President of the Azerbaijan Republic was asked to deliver a speech. In his speech he mentioned the requirements of the Legislation, procedures of considering of citizens’ appeals at the state structures and the work being held in this field. The next speaker was Mr Hafiz Hasanov, the chairman to the “Jurisprudence and Development” Public Union who spoke about the problems existing  in this field, criticized some state structures and mentioned the importance of eliminating of the problems. IN the next part of the round table the participants 0 Ms Rana Safaraliyeva,  head to the “Transparency Azerbaijan” Organization, Mr ASaf Aliyev, an officer from the Commission on Issues of Civil Service Recruitment under the President of the Azerbaijan Republic, Ms Mirvari Gahramanli, “Protection Centre of Oilmen Rights”, Mr Vasif Movsumov “Foundation of Fight against Corruption”, Mr Mirali Huseynov “Studying Democracy” Public Union, Ms Venera Asgarova, representative from “BakuElectricityNet” Joint-Stock Company, Mr Ramin Huseynov, a representative from Anti-Corruption Office under the Prosecutor General of the Azerbaijan  Republic, Mr Shovkat Bakirov, a representative from the Ministry of Ecology and Natural Resources of the Azerbaijan  Republic, Mr Faig Samadov, a respresentative fron the “Entrepreneurs Confederation”, Mr Firudin Aliyev, head of the sector from the Ministry of Labour and Social Protection of People of the Azerbaijan Republic made their remarks in their speeches, they discussed the current state and possible problems in this field in the country and made exchange of views regarding some issues.

The information was given about the investigations made in this direction. At the end the asked questions were replied and recommendations were given as well.

The “Development of Society and Civil Relations” Public Union with support of European Endowment Democracy carries out the project “For Fair Society (Euroepan Endowment Program upon providing the citizens’ rights in order them to appeal the state structures)”. The objects of the project are to gain establishing transparency in the country, revealing of forgery, assisting country to improve the process of state structures, providing the citizens legal assistance, encouraging the youth to join this process and spreading this initiation throughout the country. Being a stage of a long term and large scaled work the project is considered to be definitely held in some regions of Azerbaijan.The event for it was held on March 10. The NGOs functioning in the region and our partners who we collaborate with and youth organizations, the representatives from some organizations and active public figures participated at the event. At the round table the real and current situation in the country and possible problems were discussed and the information was given regarding to hold joint investigations due to some problems. The participants’ attention was focused upon the issue that in order to appeal state structures, to resolve the citizens’ complaints and claims transparently the citizens will be assisted by our organization. In this respect the lawyers and advocates have been included into the project.