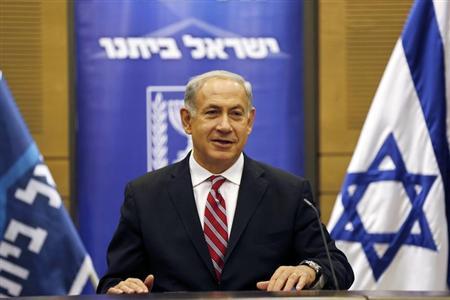 Netanyahu has condemned a proposal, endorsed by Washington, to reduce sanctions onIran if Tehran suspends parts of its nuclear work.

Netanyahu said he would discuss the issue with French President Francois Hollande, who arrives in Israel later on Sunday, and with Russian President Vladimir Putin in Moscow on Wednesday.

"We will discuss (Iran) at the head of the many issues on the agenda," Netanyahu said of Hollande's visit in public remarks at the start of a weekly cabinet meeting. "I will do the same with President Putin in my visit to Moscow on Wednesday and I will do the same with John Kerry, who is coming here on Friday."(reuters.com)