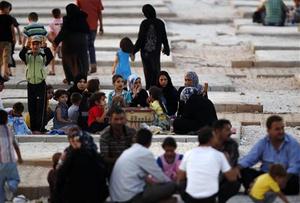 (Reuters) - Rebels fighting Syrian President Bashar al-Assad's forces in Aleppo promised a counter-attack on Friday after losing ground earlier and residents fled in cars crammed with belongings during a lull in fighting.

The rebels were pushed back from the Salaheddin district on Thursday by troops seeking to reestablish control over Syria's largest city and its economic hub - a crucial arena in a struggle which the United Nations said would have no winner.

"I have about 60 men positioned strategically at the frontline and we are preparing a new attack today," said Abu Jamil, a rebel commander, saying sniper fire in Salaheddine had prevented his men from retrieving a comrade's body for two days.

Random shooting echoed from inside Salaheddine, a former rebel stronghold that controls access to Aleppo from the south, and an unmanned drone aircraft buzzed directly overhead.